Do you remember Matthew Lesko?

I bet you do, although not by that name. He was the guy in the question mark suit who would yell at you through the television, telling you how to get “free government money.”

Of course, there is no such thing as “free money.”

New York State found these claims to be a scam on consumers. The Federal Trade Commission has whacked countless telemarketers making similar promises.

Because there is no such thing as “free money.” 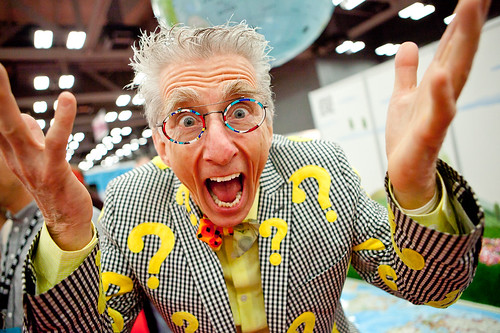 That same calculus applies to state governments. This past week, a left-wing organization assailed the LePage administration for forgoing $2 billion in federal spending over the past five years. The group’s leader was quoted as saying, “where it is all federal money…why we are leaving that on the table?”

Did you see the question mark?

Contrast this with Portland. Monday night turned into Tuesday morning, with a stalemate on debate over how much debt should be incurred to rebuild schools the city did a poor job of maintaining. Mayor Ethan Strimling, darling of the “Progressive Portland” people, and five members of the council believed waiting for “free money” — this time, from the state — was untenable.

Three other councilors shared the perspective of those assailing Gov. Paul LePage. Their argument is, basically, Portland taxpayers pay Maine taxes and should receive the benefit of them. In this case, new schools.

That is really the gist of these arguments about “free money.” In the case of Portland, the minority is correct; Maine’s constitution requires a balanced budget, so the money the city might receive from Augusta really is, in part, a levy on Portland residents and businesses.

But when it comes to Washington and federal spending, that isn’t quite true. For fiscal year 2016 — President Obama’s last year, with a Republican Congress — the deficit was $587 billion. The U.S. population was 323 million.

In other words, Washington borrowed over $1,800 for every American man, woman, and child to pay for its profligate spending. In a single year. The group attacking Gov. LePage is frustrated with Augusta passing on $300 in federal spending for every Mainer annually.

But there is no such thing as “free money.”

In many of the federal programs promising cash, a state match is required. That requires redirecting money from an existing priority or raising taxes. While Congress may have its priorities — and dangle dollars in front of states to pursue them — we elect 186 state legislators and one governor to decide whether the juice is worth the squeeze.

Others may not require a state match…today. Those are more dangerous. If Looney Toons taught us anything, it’s that dollar signs in the eyes lead to bad decisions. Once a new state program begins — even funded by Washington at 100 percent; “free money!” — it is hard to stop offering it without hue and cry. Then, when Congress decides it has a new cause du jour, they reduce the federal share. Legislators are forced to tell the group the program benefits that it is being cut, or repurpose finite dollars from elsewhere in the state budget to maintain it.

That “free money” isn’t quite free.

There may be specific, identifiable programs where Augusta can appropriately secure additional federal funding. In other words, the juice is worth the squeeze. But many of my friends on the left — and those faulting the LePage administration — have “Think Globally, Act Locally” bumper stickers on their Volvos and Subarus. It is good advice when it comes to things like recycling. Its corollary is also true when it comes to government spending: “Think Federally, Act Locally.”

Our national deficit is unsustainable; the national debt exceeds our annual production. Both parties have plenty of blame to share. Yet, states can take leadership positions and tell Washington this is not acceptable. To do so, they will need to pass on “free” money.

Maine is in a unique position to do so. We’re a leader on federal overreach when it comes to REAL ID. Bill Cohen and Ed Muskie — two Maine icons — fought to ensure special exemptions from employment taxes for Maine’s lobster fishery, maintaining a tradition of independence. And, yes, Gov. LePage, Commissioner Mary Mayhew, and the entire administration treat a tax dollar as a tax dollar, no matter which level of government spends it.

Because, regardless of your politics or question mark suit, there is no such thing as “free money.”

Michael Cianchette was the chief counsel to Gov. Paul LePage from 2012-2013 and deputy counsel from 2011-2012. A Navy reservist, he was deployed to Afghanistan from 2013-2014 as a trainer and adviser to the Afghan National Police. He is an alumnus of the Leadership Maine program and holds a BA in economics and political science from Boston College along with a JD and an MBA from Suffolk University. He works as in-house counsel and financial manager for a number of affiliated companies in southern Maine.

Notes from a Corner of the Country

Notes from a Corner of the Country

He Said It Right

Vote by mail is a safe, convenient way to participate in July 14 election

Vote by mail is a safe, convenient way to participate in July 14 election

66 Days of Bombardment from the Propaganda Machine

66 Days of Bombardment from the Propaganda Machine